Ruckus in the Rafters 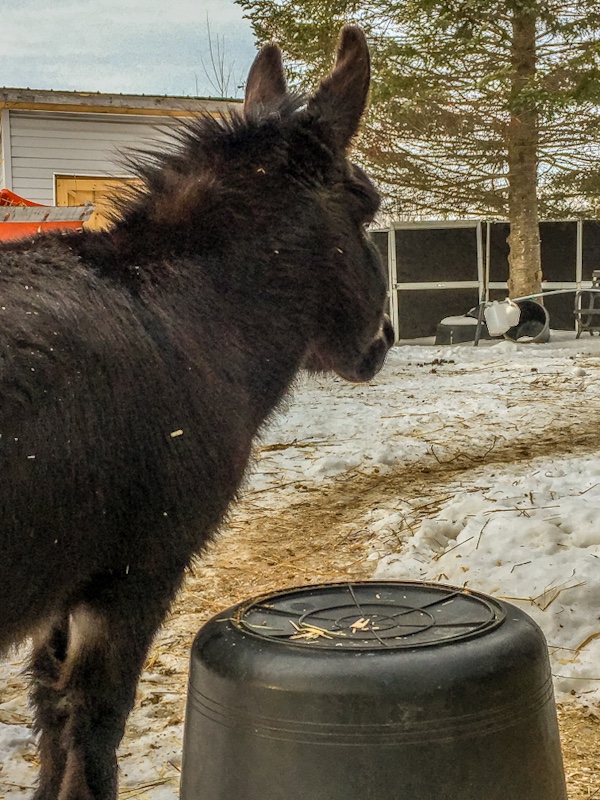 A beautiful weather day here. I had a great time hanging with the flerd this afternoon. Our snow has hardened to cement. Good thing I took the time on the weekend to plow it all back to the edges of the paddocks and our laneways. What is there now will not be moving again until there is a long thaw!

Hard snow is squeaky snow. Although ears swivel to that sound … we are mostly used to it now. We were all caught off guard by a tremendous ruckus just around the corner from the hay run in. Bella and Rosie bolted to figure what the heck was going on! 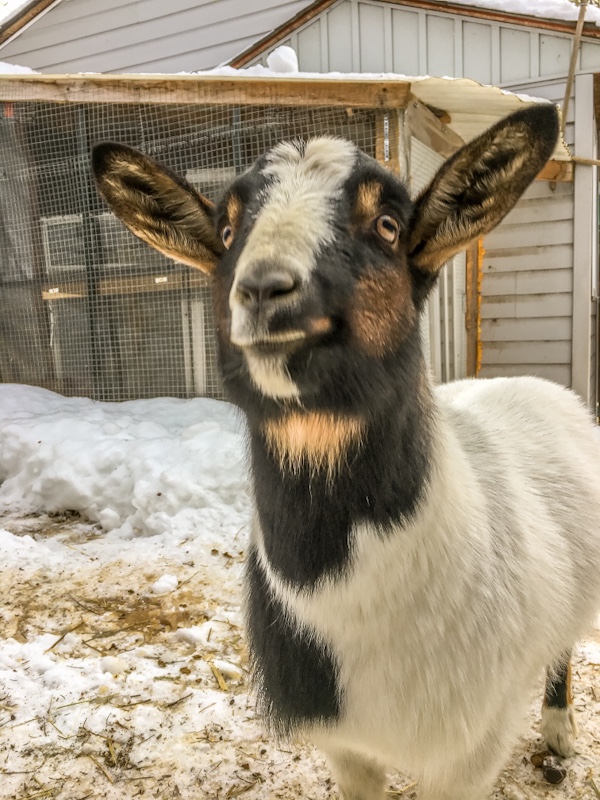 MayMay went right to the source. Two black squirrels had found their way into the roof of the goats’ bedroom. Not sure if one of them had already moved in previously and was not happy to find another in there…? On the outside we were treated to sounds worthy of a theatre action soundtrack! 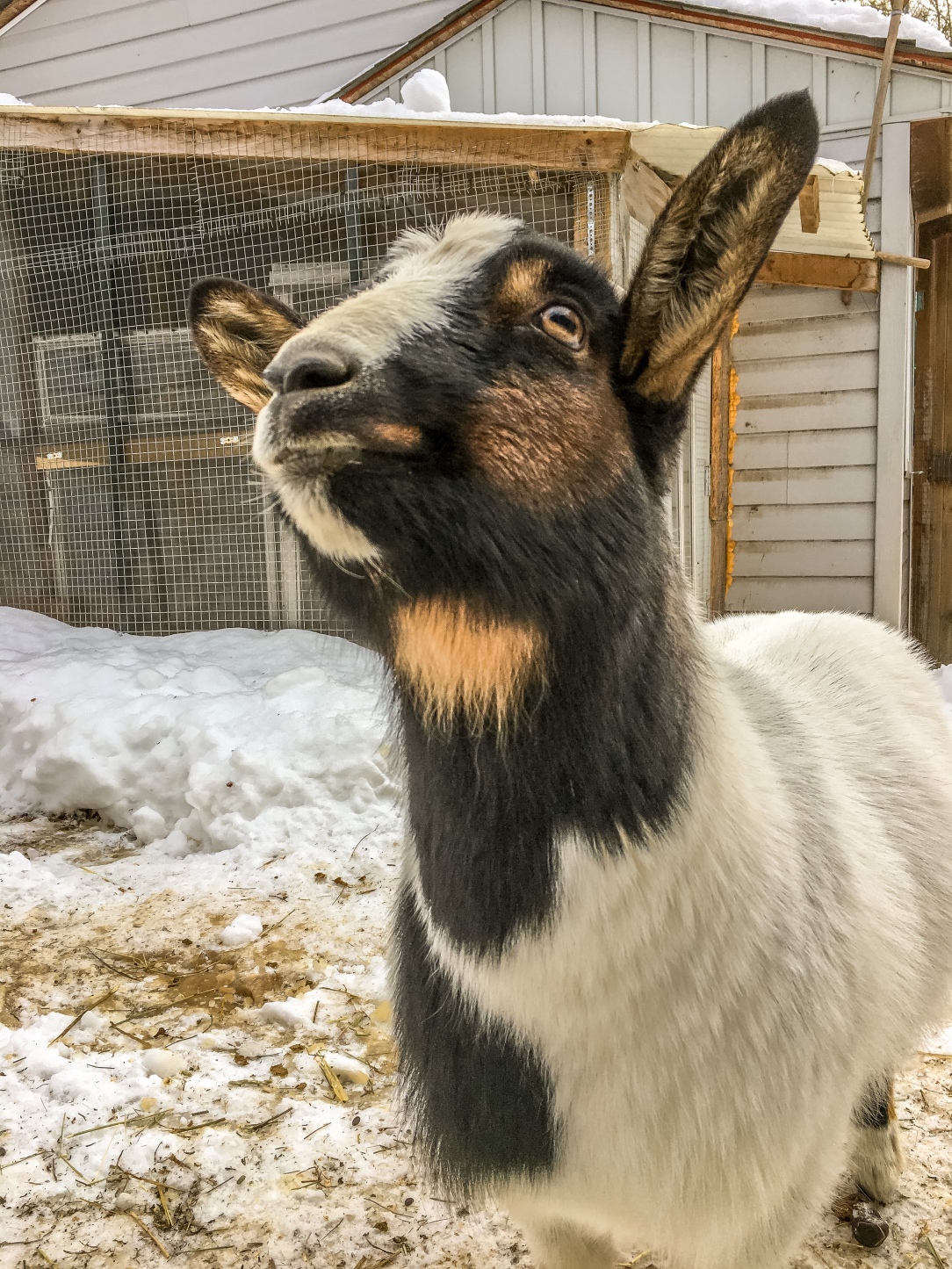 I think she ended up worrying about that squirrel! She stood there for a long time – long after the ruckus. She then followed the squirrel up the hillside to where it sat on a perch in an oak – crying and crying. There is a large basswood tree with five trunks close by that three other squirrels retreated to. I think the goats spend a fair amount of time watching the squirrels that share their woods.

The chickens also pay close attention to the squirrels. The large windows of the “palace” look out to the bird feeders. Plus – I once found a black squirrel that had made his way into their run and was headed for their feeder! 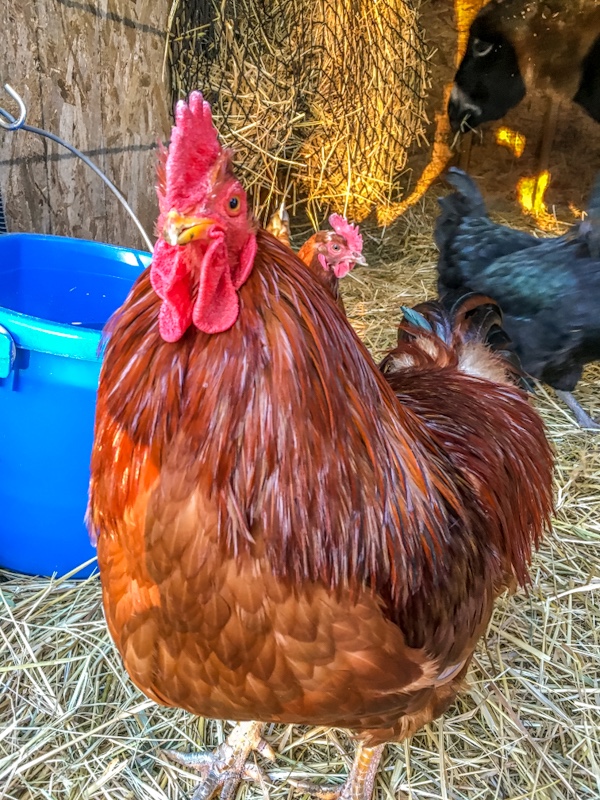 Goldie may have improved his rooster instincts but he is no match for a black squirrel! They all just stepped back and said Go Ahead! I’m glad I was around as just finding me there sent it scurrying OUT. I love being a hero! Ha!

Look at this girl! It’s Sophie! She of the famous sweaters and chicken saddles. Her feathers have grown in thick and beautiful! Hard to believe that she was mostly pink chicken skin stem to stern this time last year! She is doing great.

Have you noticed the days getting just a little bit longer? It’s still light outside when I’m finishing up the afternoon chores. Oh I do love that. Soon it will be time for bright February days. 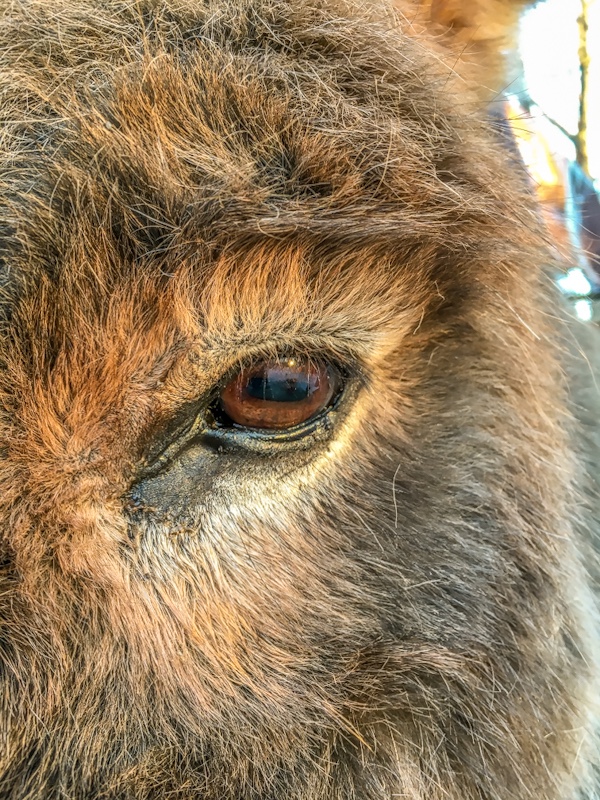 I love when the back paddock is rosey in the setting sun. It’s definitely not going to get warmer yet. But that sun reminds me it will … sometime! It is going down to -20’C here tonight without the windchill. So the jennies and goats have heat lamps to help keep their ears from getting frostbite. The chickens are all huddled up next to their ceramic heaters. 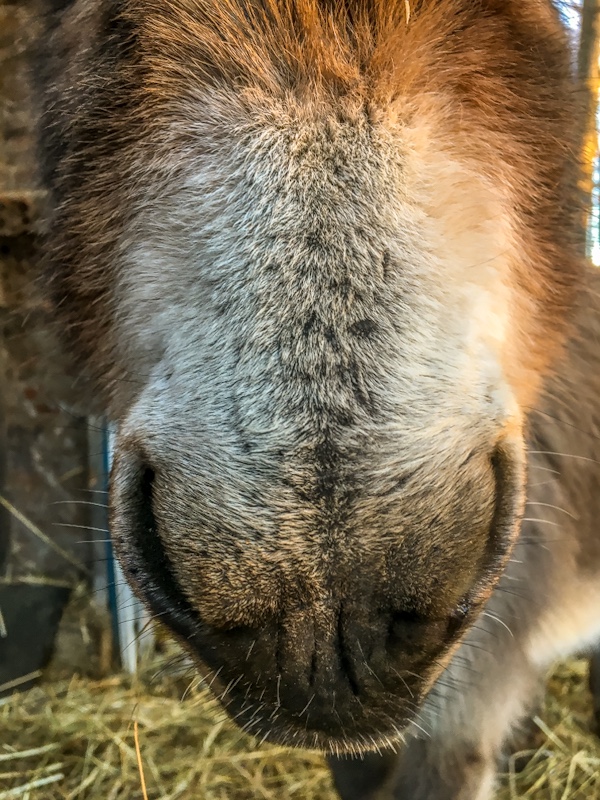 I should warn you that I might be haunting your mailboxes more often. I have FINALLY mastered a process that will let me work directly from my iPhone to my iPad for sharing photos and writing here. I had been using combinations of my desktop or laptop and my iPad and my phone. Too many contraptions to keep my photos straight! 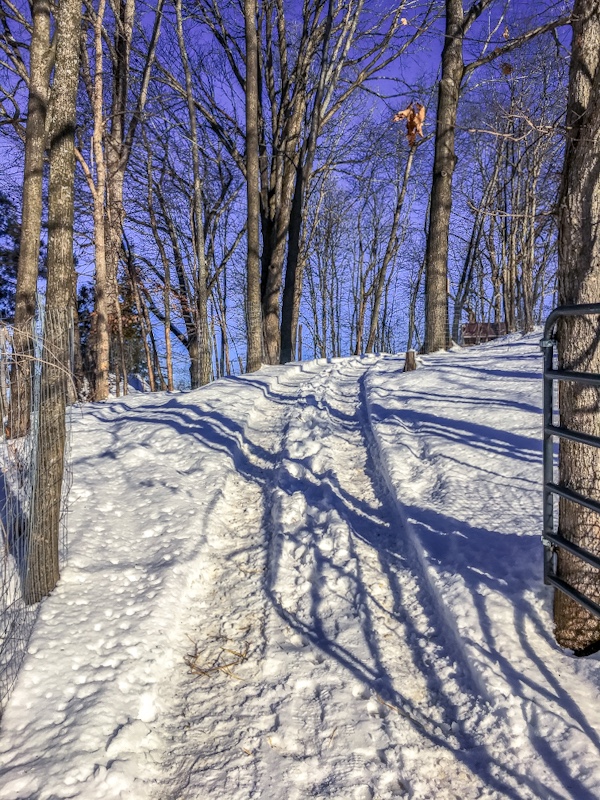 Here is a look at ‘Bully Road’ paved with snow.

Thanks for your many words of support after my last post. We are doing well. I was explaining to Ede tonight how different it is without Darby. She would always be where ever I was – usually telling me what to do – as well as herding both the minis and the goats to come along as well. Unless it was afternoon snooze time it was never calm. Darby liked to run – she liked to tussle with the goats – she liked to boss Rosie and Bella around. She even had this very regal way of walking up to a stack of hay – tossing her head – to make everyone else LEAVE. It seemed like she was always certain Rosie’s hay looked like it would taste better.

It was downright mellow out there today. The jennies and the goats kept to their own hay piles. Even the chickens were all in the same mix. It may become my job to stir things up! Can you just imagine the looks on the faces of Rosie and Bella if I started to dodge at them, kick up my heels and chase them through the woods? Can you imagine how long it would take me to recover from just doing that once?! Ha!

4 comments on “Ruckus in the Rafters”