Seems Rufus’s second most favourite channel is now the Guinea cam! 😉 (Video clip alert – check it out at the blog.) Things were a little too exciting in the Guinea coop tonight. Miss Charlie was running frantic races in circles when I slipped inside. The roosters were not perturbed … but she was crazy! I settled down on my knees and watched as she hopped over the low rails, plunked her way across the little piano and then ran smack dab right into the edge of the mirror. Her chest took an awful thump. Then she backed up and ran at it again only this time managing to get behind it to squeeze it away from the wall all the way along until she came beak to heel with my boot! Ooops! She froze on the spot … so still … and carefully … and deliberately … looked anywhere but at me. I stayed as still as possible and watched to see what she would do. Not a thing … I think she would have stayed like that as long as I stayed still. Ha! One little shift to the right and she squawked as only a Guinea can – rose directly up into the air – turned on a dime and resumed her crazy routine in the other direction until … once again … boink! She ran into my boot again. Many people have warned me … and it is true! Guinea Fowl are so much fun to watch. What antics!

Hmmm … ‘someone’ must have been bored last night …

And ‘someone’ looks very guilty today! 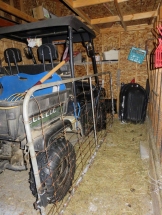 Plus I decided I had better add a slew of new toys to the back paddock. 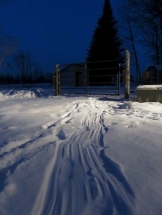 Hopefully tonight things will not be so eventful. 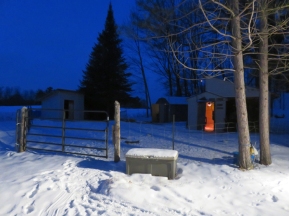 All ‘looks’ calm … but looks can be deceiving!

Meanwhile … out in the paddock … there were other shenanigans going on. Throughout the night I could hear either the sound of an angry squirrel reefing on the lids of the feed bins in the garage … scrape – scrape – scrape – pulling that lid up until the lock caught – over and over and over again. Or one of the donkeys pushing something around the paddock – perhaps one of their jugs or a shovel or a sled (which should have been secured as a protector for the Bully seat in the garage …). I was hoping it was the squirrel scenario.

As you can see above … not. Seems Darby had a wonderful time methodically taking the seat of the Bully apart … piece by piece … and layer by layer. Argh!! I ended up dragging one of our gates over as a barrier. Then I spent the afternoon thinking about what might help. The consensus was ‘toys’ – more donkey toys in the back paddock. Having scouted the garage and the basement I found more than enough to entertain both the jennies and me. 😉

Most of the ideas were pretty good. Most … One was definitely NOT. It involved hanging a pail with some treats in it (dried apple bits and some grain) which the jennies could then knock about to get tasty rewards. Crazy! What was I thinking?! The last thing the jennies need is a reason to wrestle and fight over a prize. Rosie was the first to figure out that the toys I had tossed their way at the gate did not carry the delicious smell that followed me into the paddock. I was just about to pull the pail up using a rope tossed over a branch when kaboom! She surprised me and dove for the goods. Her head is a pretty good fit for that pail. I gave her a treat and then raised the contraption high enough to give Darby a good challenge. That’s when I realized poor Rosie was frantic! It was too high – too high! AND she could see Darby coming along. Darby could see Rosie’s consternation and figured something good had to be up there. And away they went. Pail swinging, jennies knocking each other out of the way, me trying to get the rope undone while making sure neither was caught in it. Goofy human! Instead I divided up the treat into three bowls and knocked myself on the forehead. Dipsy idea! Hmmm … I guess that was just one horse in one stall in that picture I found online. Egads!