I blocked off the windows in the Bully Barn to make it darker … less inviting to biting flies.

Rosie decided it was an indoor day today too.

Bella and Darby sticking close to the barn this morning. 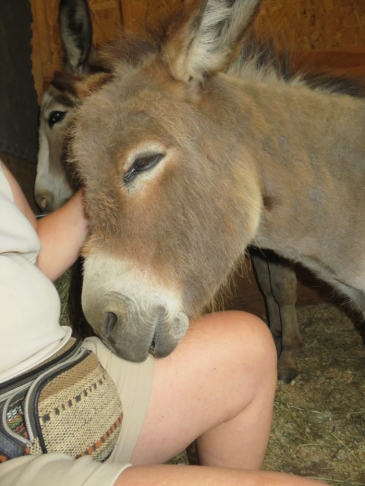 Poor Rosie feels so badly today … after having her shots yesterday.

Our attempt at another deer fly solution … 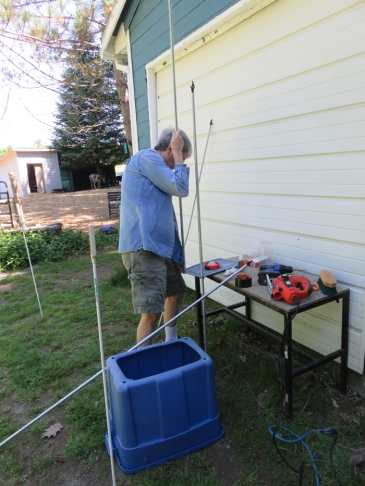 My own Mrs. Fixit at work!

I wished I could pick Rosie up and cradle her today… she was feeling so punky still. Last evening I noticed she was so stiff she was stumbling when she tried to walk. We had a real bout with her last spring as well after her annual needles. She doesn’t have any swellings but her shoulders are HOT. She was content to find a shady spot near our fans and enjoyed it when I would gently rub her ears or lightly scratch her chest. Bella and Darby are a little off their game too … but nothing like poor Rosie.

While the donkeys hid in the barns Ede and I tackled some deer fly trap ideas. We’d seen designs online that direct the biters up through a trap into a screened in area. There is a bucket hanging from a rope that is supposed to simulate the movement of an animal. It did catch six flies over the afternoon. We decided to not stop with that idea. Ede brought home some sticky traps to hang up. And I decided to block the windows in the Bully Barn. I had noticed the flies were attracted to the windows … which are directly over the hay feeders. The donkeys found it a little strange a first – but when they experienced the relief of that dark corner they all crowded in for the end of the day. Perhaps we hit one out of three today. Bug season is only beginning!