Isn’t it amazing how life can change … I can look back at so many different ‘lifetimes’ within my one tiny lifespan. No wonder I find it intriguing and possible that there could be limitless universes out there. I sometimes feel like I’ve already lived in a few totally different worlds. And I have clear memories – smells, sounds, seasons, people, perspectives – from each of them. I grew up in a family that moved around to different cities. Making friends, exploring new neighbourhoods, joining new school communities … became something we almost looked forward to. Like everyone I had different worlds in elementary and high school. I had a wonderful time exploring life in university. And then became a teacher at a time when it was policy that we move schools at least every seven years.

Today I spent an hour videotaping a theatre production for some friends. They are a troop of teachers who perform for the schools in our District. This morning’s performance was at a school that I had taught at for ten years … another world ago. It was lovely to walk back into the school. Past the rooms that I knew with other names on the doors. Hearing the timeless sounds of children chatting, working, learning.

When I was back home this afternoon – doing donkey chores – I realized how much I’ve come to know the critters that make their living in and around our paddocks. I know where the red squirrel lives. When I hear him burrowing in the leaves I know it is him without looking. He runs back and forth from the garden to the woodpile and the donkeys and I just glance at him as he goes by. He is one of us – one of the paddock creatures. He rules the squirrel kingdom. The black squirrels (there are four of them here full time now) know to stay out of his way. 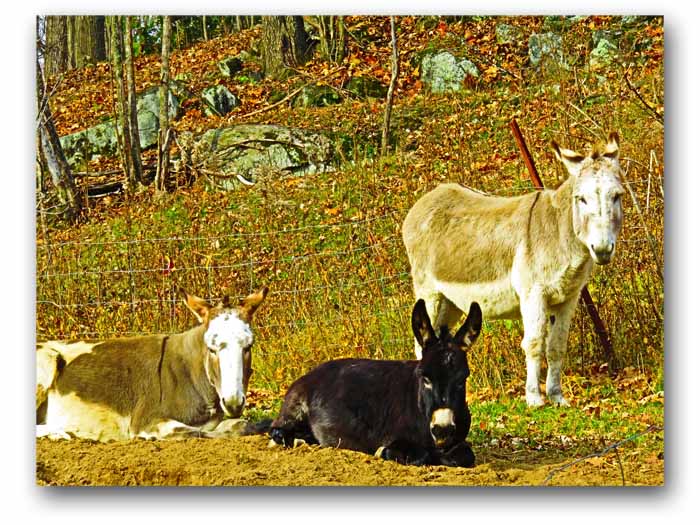 While the donkeys soak up the sun on the knoll they lift their ears ever so slightly if a squirrel scurries along the hillside behind them. But only slightly. They know the squirrels as their neighbours. They know the chickadees and the nuthatches and the morning doves that way too. If a car or a truck roars by on the road they don’t even open their eyes. That is white noise to them like the sound of the trains at the crossing about a kilometre down the road.

Now … should a bicycle shyly whir by … all heads go up.  If someone walks the track at the fairground, some hundreds of metres from their resting spot, all ears will follow the sound of the foot falls in the gravel. If walkers are coming down the road all eyes will be peeled that way long before they come in sight. Likely following along in the conversation as well with their long ears. Right now – these four donkeys and I – a half a dozen squirrels of various kinds – a hundred some birds in a mixed flock – our two feline buddies – and the odd raccoon visitor – we make up this new world I’m in. I don’t know how long we’ll get to share this little universe. But I do know that I will have brilliant fond memories from here and now.

2 comments on “Here and Now”