Early this morning – finished breakfast – checked out the back window ………………

……. had to call Ede to look to confirm just what is that? 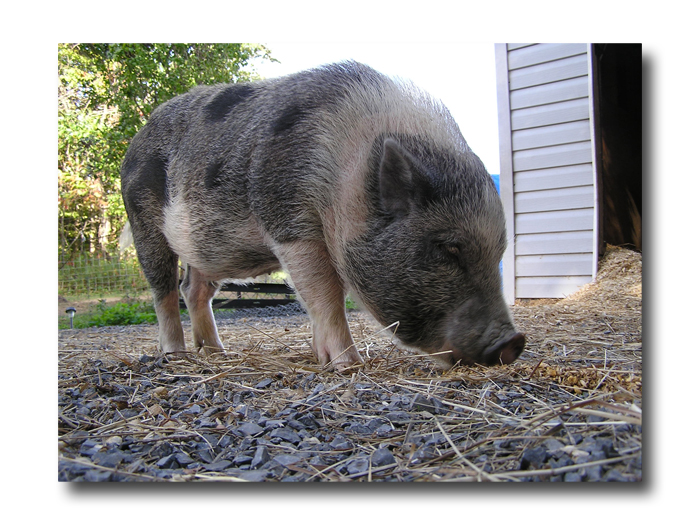 Seems we had company – pig company.

Donkey chasing – donkey loving – pot bellied pigs desperate for some new friends. We discovered that the farm they were from had just moved out the last of their goats and alpacas … and the two pigs, Dozer and Samson, were trying to find out where they’d gone. 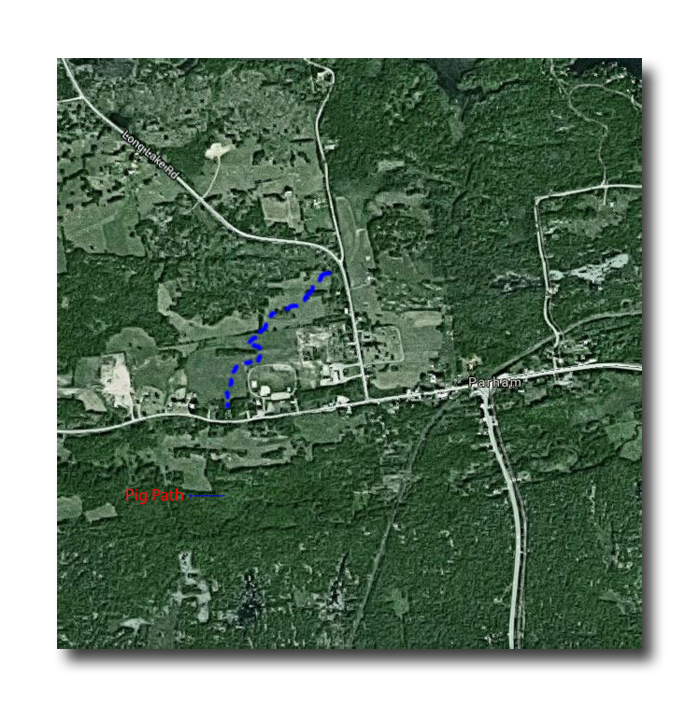 Charlotte and Wilbur would have been proud of their industrious efforts. With phone calls here and there … plus a few hours of pig sitting and donkey reassuring … we finally met up with their ‘mom’. Armed with a package of ginger snaps and two red rakes she and I herded Dozer and Samson back through the fields to their home paddock across the village.  I was some happy to sit down to lunch today!

When I got back out to do the chores I was attempting to reassure the donkeys that they didn’t need to keep such a close eye on the woods. The pigs were home. All was well. But no … those jennies would not be pulled from their lookouts.

Turned out there was a good reason for that! Seems pigs can fly!

Dozer and Samson must only have paused long enough in their own paddock to eat their lunch … and then hiked their way directly back to our place! Although it was comical to watch the pigs continuously approach the donkeys – curious and friendly – it was NOT fun to watch the donkeys take off and run. Nor to see their mounting frustration at losing control of their habitat. Darby had a run in with a porcupine a few summers ago and she is NOT keen to approach something that looks this similar.

Paco, on the other hand, was beginning to try to find a way to take matters in hand. So, back out I went. I didn’t want pigs or donkeys hurt.

After dinner reinforcements arrived in the guise of friends from down the road. We spent a few more hours trying to talk them into the back of a trailer. As the light started to wane the pigs had mastered every nook and cranny of the two paddocks and the woods. They knew where every loose wall of fencing was, where every bush was, and even where every rock cliff was.

Finally, Mrs. Neighbour managed to get a hold on Dozers front leg. She hung on for dear life until Mr. Neighbour could wrap his arms around Dozer and heave him up and across the paddock. He threw both himself and the pig into the trailer and Mrs slammed the door shut. There was an awful lot of grunting, banging, swaying and cursing going on in that trailer! When I looked at her wide eyed she said, “Oh, he’ll be alright.”  Eventually Mr was able to toss the feed bucket to the head of the trailer and Mrs let him out the tiniest crack in the door. She was not letting the pig out at any cost! 😉 Although we did manage to tackle Samson – Mrs once again leading the way with a deft leg grab – Mr was not able to spin quite as quickly as the pig. Mrs was tossed down a rock face, Mr hit the bushes and Samson shrugged it all off and went to chase him some more donkeys! It is now dark – Samson is black – we are black and blue. Dozer is spending the night in the trailer rolled into the donkey garden. Samson is yelling at Dozer for being stuck inside. I don’t think it is going to be a quiet evening here at the Meadow!

6 comments on “This Little Piggy”