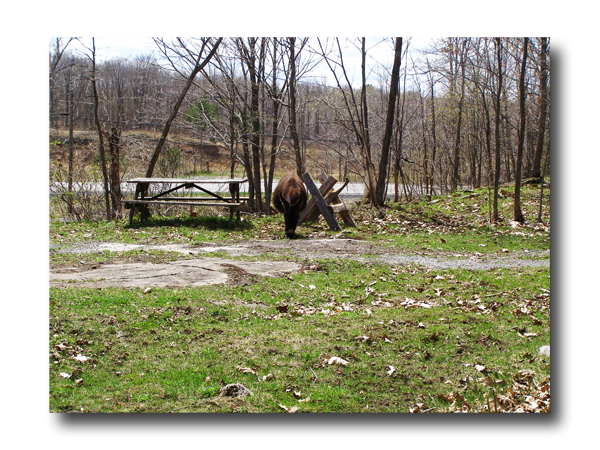 Last spring I had the chance to watch the season change day by day. And contrary to my former belief that the blackflies arrived when the creek was running high … they seemed to come THE DAY the buds on the trees opened and the leaves came out.

So Bella and I decided to keep a close eye on things again this year. And sure enough – THE DAY those buds popped so did the hoards of blackflies. Bella has become very popular with the rest of the herd … I think they’ve realized that the flies like her black coat the best … and her black ears … and her black nose … Poor thing walks around with a cloud like Pig Pen (Charlie Brown’s friend).

By mid-morning all four donkeys had given up and were standing in the barns looking out at the day. I pulled out a bottle of bug spray – and Paco and Rosie promptly high tailed it to the other barn. Bella and Darby both pushed in for a good dousing. I guess just as the first two clearly remember last year’s experience … so do they. Funny how two love it and two hate it? 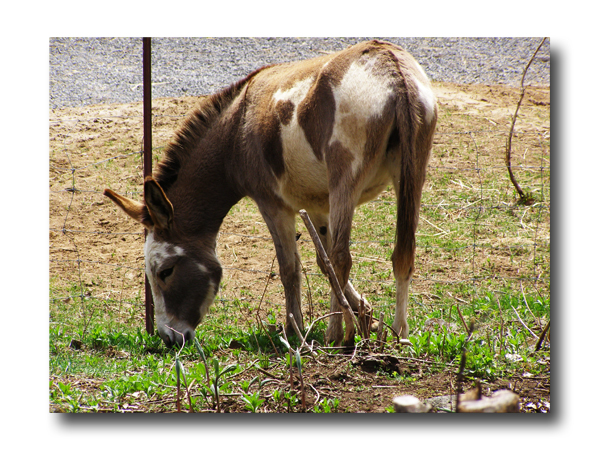 That meant that Bella and Darby were relatively comfortable outside even before the wind came up. By noon we had a great stiff breeze that meant the front paddock was almost bug free. While I was out working all four came out to munch and enjoy the reprieve.

Each year when this season arrives I try all kinds of things to make the herd more comfortable. We have fans in each of the barns. They do like to line up in front of the big one in the Bully Barn. We have insecticide sprayers installed in each barn that dose the shelter automatically throughout the day. I have bug spray – that I spray on, wipe on the inside of their ears and when the bigger flies get worse (later in the summer) soak their ankles with.

But what I really was craving today was a good fly mask and ear cover for Paco. His ears get so badly bitten that they’re crusty for a good hand width at their tips… He lets me gently rub the bites and move the bugs out if he is in a cuddling mood. I did some web searching, called a few places, wrote a few more … and then Ede reminded me a friend had dropped off some fly masks a year ago. (At that time I thought it quite funny that seeing how I couldn’t put a halter on Paco without a major ‘to do’ I’d never get something that looked that THAT on him!) This picture is NOT of Paco…but it is exactly the mask.

I decided to see what would happen … I took my pouch of carrots and approached my trusting friend. For touching the mask with his nose he got a treat … and a few more times. Then for letting me touch his forehead with the mask he got another treat … and a few more times. Then for letting me touch his ear with the mask … and so on. Until … incredibly we somehow got it HALF on. One ear completely covered and his face covered. Ooops! That caught us both off guard! He high tailed it off down the paddock. I stood my ground and waited for him to come back. Darby and Rosie saw him coming and at first trotted toward him to see what that strange thing was on his head. Once they got closer they both spooked and ran off. Paco stopped – watched them run away – and then trotted after them – which spooked them even more. Bella was not the least perturbed and brought up the rear trying to catch up with him to see what all the excitement was about. Eventually all the running and the wind managed to blow the mask off. All four took a good look at it and then decided to just give it a wide berth! I was a little anxious about whether Paco would then act ‘strange’ all day – but no – he was right back checking to see if there was anything else he could do to earn a few carrots. 😉

So the fly mask and ear protector … a possibility for my trusty friend! That would be a great addition to the spring arsenal! We’ll have to see whether he’d dislike the bugs or the mask more …