We had a little of everything today … rain, ice, snow, sleet, sunshine, wind … I got up feeling a little anxious about how Rosie would be doing. When I turned in last night I knew she was feeling terrible. So first thing I headed out to have a look see … 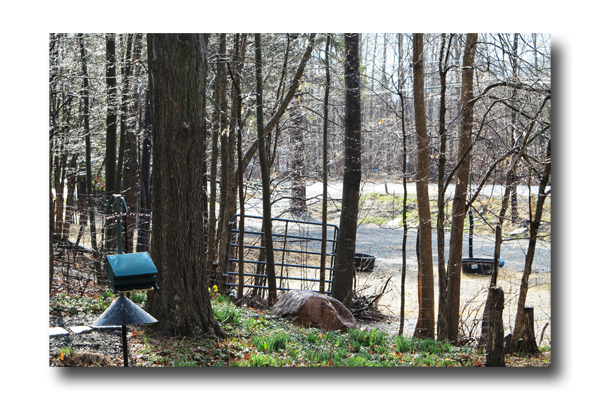 I didn’t find it all that strange that the herd was not out in the front paddock. The rain had only just stopped. There was plenty of hay left in the back barns and lots of water. So I ducked back inside. A few minutes later I saw the donkeys out the kitchen window. Well … two of them. I could see Bella was still in the barn eating (she does a lot of that these days). Paco and Darby were heading down the hill … And then … there came poor Rosie! 8( She was dragging her front right leg but determined to stay with the big guys.

One hour, and one hail storm later, our vet was back. Two days ago all four donkeys had their spring vaccines. It was pretty much 24 hours after that that Rosie took her turn for the worse yesterday. I was thinking that perhaps Rosie had a sore shoulder from her race with the manure sled (three days ago) and that was what today’s addition to her woes was… But after giving her a good once over the vet figured that she had a lot of swelling in her shoulder right below where she had her two shots. Her hoof was fine, her knee was fine, and she could bear weight on her shoulder. She just couldn’t ‘extend’ her lower leg forward. I’ve had similar injuries when I hurt my quadriceps… You can lift your leg using your knee, but you can’t extend your foot out in front. That did look like what Rosie was suffering with. So – good news – no evidence of broken bones or a dislocation. But – bad news – the swelling was really making her uncomfortable and it likely will take a good week or two to clear up. He prescribed giving her ‘bute’ (phenylbutazone). That’s like ibuprofen for donkeys. (I had actually considered grinding up an ibuprofen before the vet came …) She LOVES the taste of the liquid and took a good 5 ml right away.

The vet headed on his way and I stuck close to the girls – giving Rosie scratches to distract her from her sore shoulder. She and I were sitting quietly when I realized Bella was now limping the very same way! After giving her a dose of the bute she seemed to feel more relaxed as well. Paco and Darby seem fine. But both of the minis have taken a beating with this year’s shots. Not sure if they’ll need future shots to be one in each shoulder … Although, I would hate to see this type of swelling happen on both sides! I will remember this next spring!