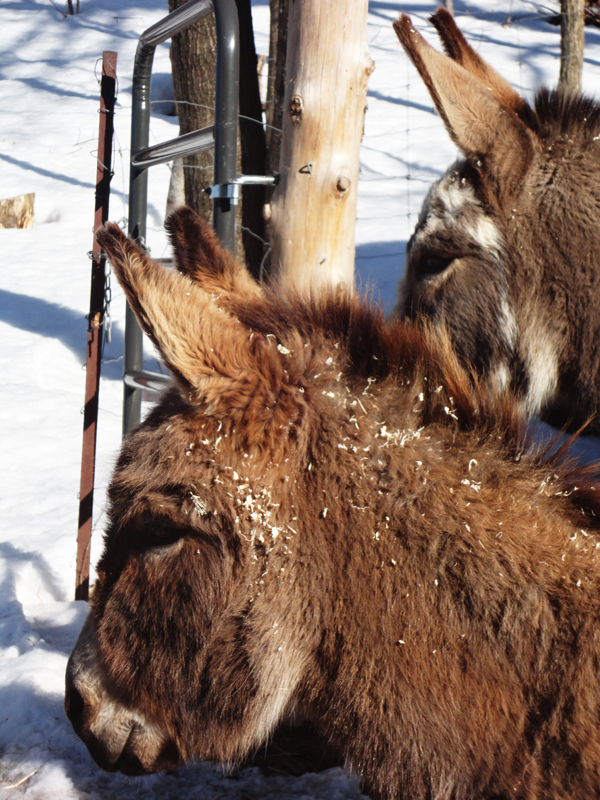 Ever have a day when you can’t decide what pictures to NOT use?

No hat … no mitts … and the air was full of chickadees and finches. It really is spring – fancy that! Each year – it’s a surprise – that it actually has arrived. I think my favourite image of the day (sorry it does not exist in a picture) was Paco   r e a c h i n  g  …  over Darby’s back to touch our training ‘bobble’. He wanted some carrots too! I’ve had to come to the conclusion that feeding carrots and a sprinkle of sweet grain all year round is a no no for my guys. Rotund donkeys are not healthy donkeys … No more breakfast bowls of carrot cereal. So instead I pack a small baggie of carrots in my pocket. Then when the timing is right I can use them for rewards and treats – only a few chunks each – not a bowl full. When the jennies catch on to what I’ve got they don’t let Paco through the melee. So after working with each of the girls in the barn there was not a way for me to clear the ‘runway’ for him to get in there. He took the situation into his own hands, saw the training baton, strained to reach it to show me he knew what I wanted him to do – knowing we’d have to make the best of a crowded situation. How I love that donkey!

North side of the hill … 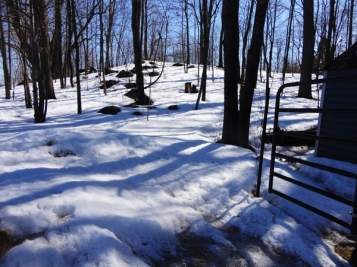 North side of the woods … 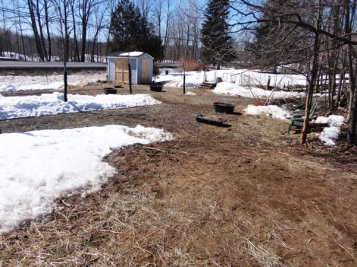 South side of the hill … 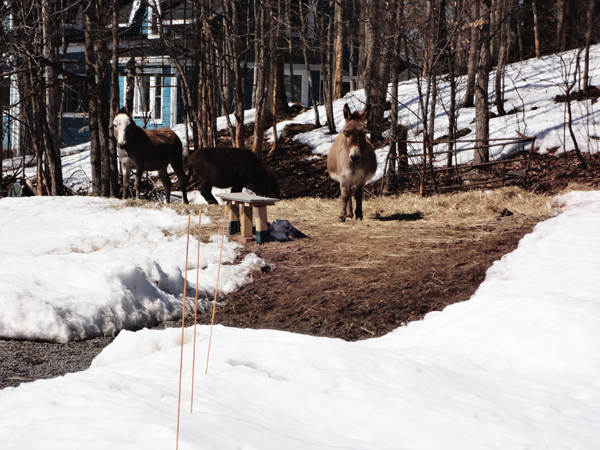 As promised last week … a comparison of the north side of our property and the south side. Not hard to guess where the herd likes to hang out this month! Although, when I’m filling hay bags or scooping manure in the back (north) paddock the donkeys all like to come along to keep me company. Today Darby and Rosie noticed someone was over at the fair grounds playing catch with their dogs. They were mesmerized … and stood like guard donkey statues for a long time watching the action! 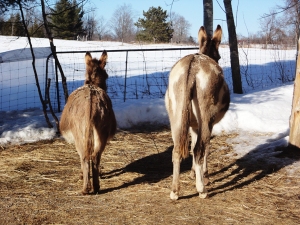 Meanwhile I worked away knowing I was fully protected! 😉 The barns have been working out so well. Just before winter set in we widened the back hay barn door. That allowed us to put a full round bale IN the barn intact. We also added a second hay barn in the front paddock that came with a wide door (now there’s an idea!) Still chuckle when I think about our early adventures ‘storing hay’! The very first time a bale arrived Ede seriously considered using the chainsaw to cut it so it would fit through the door. (Ever heard about the kind of fire you can create doing that!!) Then there was the long series of months that I meticulously pulled entire bales apart – pitchfork by pitchfork – to store it all loose in the barn. First that totally exhausted me each time! That is hundreds of pounds of hay to move! Second it ended up drying the hay out so anything that was green – wasn’t by the time the donkeys got to eat it! Now – we seem to have a great system on the go. One that even gives me time to stop and enjoy the fresh hay smell – in March! 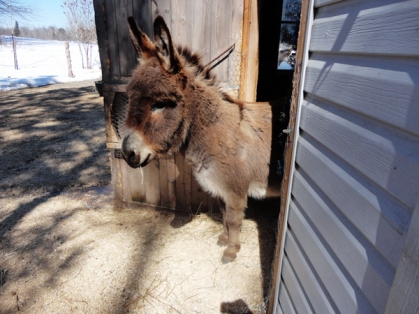 Did I hear someone munching a carrot chunk? 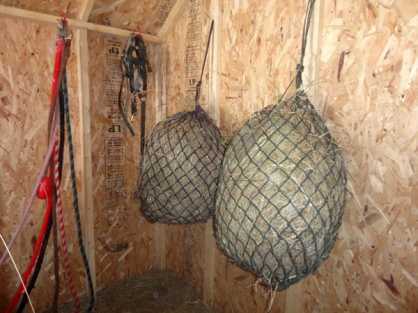 Order in the barns!

We’re ready for you rainy days.

What the chippy saw…

And now the sun is going down – the herd has had their run about – and we’re ready to tune into the second episode of Downton Abbey. Ahhh… a diamond day!

(These are galleries again … so email followers will get a better view by following the link to the title of today’s post.)

Hope you enjoyed a bit of spring your way too!

3 comments on “Ever have a day when you can’t decide what pictures to NOT use?”