Ahhh … the arrival of a fresh new bale of hay! This large round bale of hay – delivered courtesy of our wonderful hayman, Randy – will last about one month. If there is also another round bale in the other hay barn. We have two – upper paddock and lower paddock. If we’re just feeding from one bale … it would last two weeks. We are far from the grunt and groan days prior to having wide hay barn doors. Even I find it hard to believe that for the first year and a half of living with donkeys I would take the entire bale apart outside of the hay barn and pitch it in one fork load at a time … all 600 pounds of it … so it was a loose hay pile! Now, I simply unwrap it – around and around and around. So much easier!

Even though this bale was delivered right into the barn it had its own special challenge. The outside layer was frozen solid and I had a devil of a time trying to find a place I could break it to peel it off. If I only could have peeled it like a perfectly roasted marshmallow … it would have been a cinch! 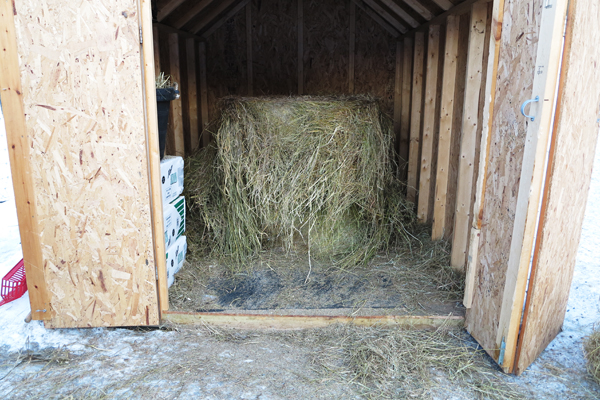 Quite a while later … I had the ‘crust’ removed and a shaggy bale to work from. Of course … I also had my ever faithful work crew to assist with the process. 😉

I was very tempted to use that ‘crust’ as a straw mattress for the lower paddock. It could have been a wonderful bed for the donk-a-lonks to sleep on in the sunshine. But then, I remembered the tedious task of trying to pry last year’s hay mattress out of the ice in May. I thought again.

At one point Darby got herself into a whale load of trouble by nipping at everyone – me included! I believe she wanted us to move it down to the lower paddock. She thought the whole ‘unwrap the bale’ job was taking way too long. When I chastised her she stormed into the Bully Barn and stuck her nose in the corner. I have come to realize that she gets embarrassed if I dress her down – especially in front of the other donkeys. I had to go and coax her out of her funk. She’s an interesting and tremendously smart one, Darby is…

Soon enough we worked our way out front. Hmmm… yes … the ‘lower’ paddock is also the ‘front’ paddock. It is also a lovely southern exposure with a hill to break any north winds.

While the donkeys graze on newly stuffed hay bags I work at getting the next morning’s bags packed. That makes it much easier at breakfast time to get new food out pronto.

I’ve taken to augmenting the two feed bins with two loose piles of hay. I think it is especially good when the days are so cold and the herd stays in the lower paddock as long as they can. It also helps to have four feeding areas. When anyone is cranky there is always some place he or she can go to eat alone.

We have come a long way from nervously putting hay out every four hours (8 am, noon, 4 pm and 8 pm). In those days we used free feeding bins and in no time the hay was swept onto the ground, sorted, munched on, and then squarely shat upon! Any one of our herd could turn their big brown eyes on me and convince me the spoiled hay was either too dry, too wet, too strawlike, too grassy … We’ve come to a much better understanding which seems to go something like ‘eat your vegetables’ – and yes – that strawlike, drier hay over there – that’s donkey vegetables! Although … I still believe them when they say I should bring out more carrots. 😉