Today is a special day around here. This is the day that Paco ‘came home’! Just two years ago I couldn’t believe my good fortune … my best buddy four footed friend was coming to live with us. Instead of traipsing across the village and out into the dark fields and woods after dinner to find him I would be able to step out the back door and give him a hug just any old time! So – tonight I’m sharing my November 3rd and November 7th posts of 2012 and sending back ‘Way to go!’ cheers to the Wendy and Paco of then from the Wendy and Paco of now!

Amazing news! Frank has just let me buy Paco!!! He will be moving here to live with we Meadow Mice in two weeks! I guess we’d better get going on the last few snips and links needed in the fence lines AND line up some hay and some straw and a few toys to keep him occupied! Hurray! I’m so excited and happy and nervous and relieved and awestruck! 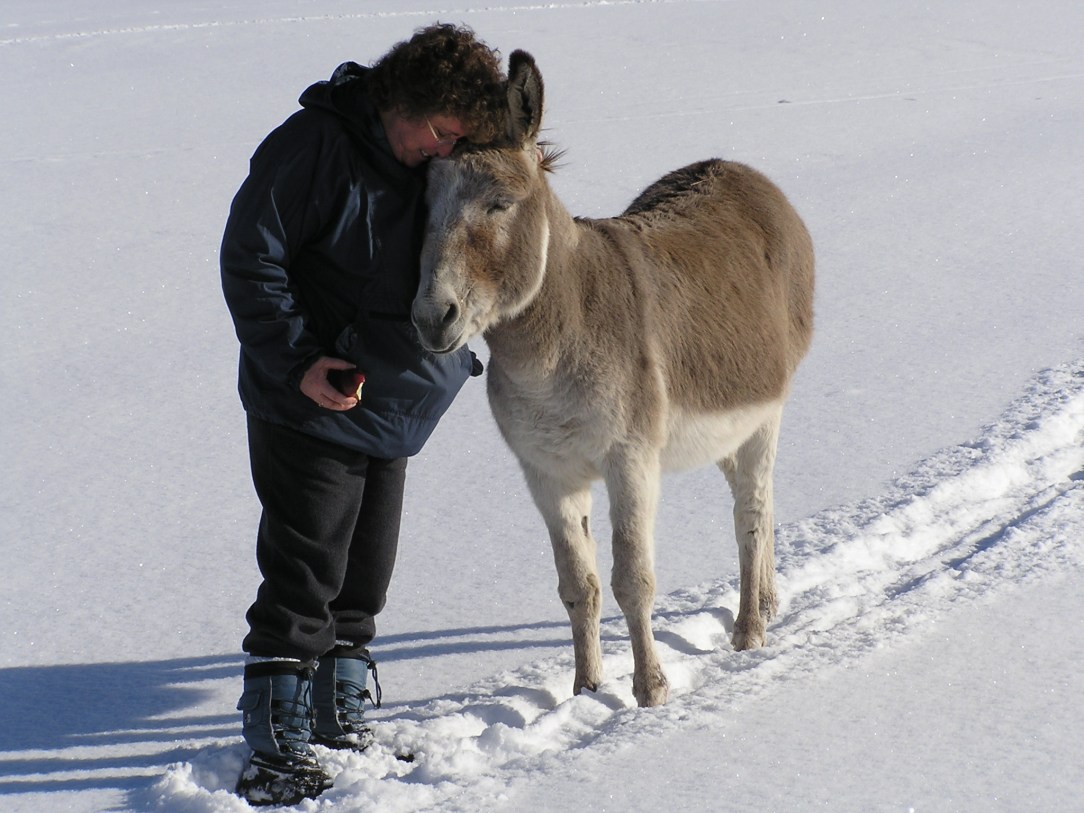 Looks like I’ll be spending lots of time outside in our very own donkey yard!
xoxo
Wendy

Tonight was a major step in ‘Wendy and Paco’s Amazing Life Adventure’! I was able to get away from school early this afternoon. So when I got home just after four it was still light… and there were hunters EVERYWHERE. Last night I picked up a halter and a lead rope on my way home. So I had what I needed IF I could convince Paco to follow me home instead of haunting the woods for yet another day in deer season.

I headed over to the field and called and called him as I checked out the barn and then his old paddock. As I turned to hike out to the bush myself he came running across the field – whining all the while in case I had done the unthinkable and given his carrots to the sheep. (Heaven forbid!) After a short conversation and half a dozen carrots he moved in for his usual hug and ear scratching session. I was able to slip the lead rope around his neck and used a true ‘cowgirl move’ taught to me last night at the Tack Shop in Harrowsmith. I am not sure who was more surprised … Paco or me … when there we were with a handsome halter, a lead rope and the two of us – ready to go.

That was the quick part …

One thing I’ve learned about donkeys is that you cannot ‘make’ them do something they don’t want to do. I sure learned tonight just how much Paco trusts me. First we had to maneuver our way through Wagar’s gate. Then we had to decide just how close to those cars travelling up and down the road we were willing to go. We had a nice stroll through the graveyard and even an easy jaunt over the Long Lake Road onto the parking lot at the school. We had a long talk about whether it was wise to walk between two buildings (the portable and the gym) but decided that if Paco hid his eyes under my arm he would be able to do it. Our last obstacle was to work our way through the fallen trees and the downed gate between the fairgrounds and the field behind our house. Again – trust won out. It took us about half an hour to make the journey – MUCH faster than I thought. All the way along my heart was racing and I couldn’t stop smiling. Paco’s heart was racing as well… I’m certain … but he was more curious about this whole village he had been listening to all year and now was getting an eyeful of everything he could. By the time we reached the backyard it was dark. When I took him off the lead he checked out the yard, the woods and I’m sure he would have checked out the roadside field too – but the gate was closed.

So now I’ve left him with the hay barn open – munching away on the haystack that Ede so perfectly arranged for him earlier today. He’s found the water – and is eyeing the donkey house … not so sure he’s interested in any indoor accommodations yet. Hopefully by this weekend’s rain I can convince him that the donkey house is ‘home sweet home’ on bad weather days. I think I’ll leave a few carrots in the far inside corner when I leave for school.

The image I’ll be smiling about all day is Ede raking some gravel IN the SAME fenced in area as Paco. They’ll have some good bonding time to get to know each other. 8) Tonight, when she came out to take some pictures he came right over to the fence to see who she was. I can tell he is nervous – and he is eager for any hugs and pats that we have to offer.

Tomorrow afternoon’s plan involves a long walk in the back fields. That is if he is not exhausted from helping Ede to rake the gravel.

SO HAPPY here at the Meadow!
xxoo
Wendy